Abakundakawa has captured the attention of top roasters not only for its delicate and complex cup profile but for its efforts to strengthen Rwanda's social and economic fabric. 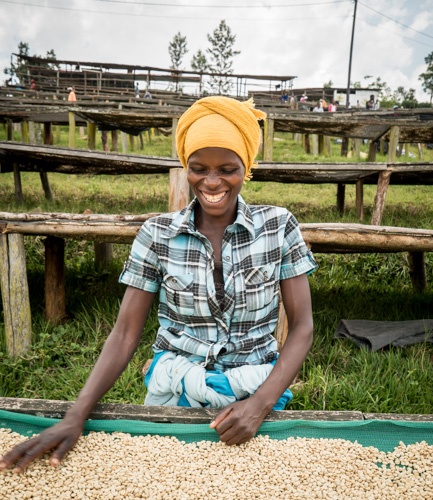 Abakundakawa cooperative farmers hand-pick ripe cherries on the volcanic slopes of Rwanda’s mountainous Gakenke district. The area’s distinct micro-climate, high elevation and rich volcanic soils contribute to producing coffee with balanced sweet, floral, and fruit-forward notes in the cup. Abakundakawa has grown rapidly, adding a second washing station and expanding its membership from 180 to nearly 2,000 coffee growers since its founding in 2004.

Abakundakawa is a central economic and organizing institution that builds local infrastructure and pays dividends to its members. Co-op leaders, who are democratically elected, implement community projects like supplying fresh water to a local hospital. Abakundakawa also provides its members with health insurance and has partnered with an NGO to give all its members dairy cows, making strides toward improving food security in the region.

Abkundakawa has two prominent women's associations, Duhingekawa and Abanyameraka, demonstrating the co-op's focus on improving the livelihoods of women in their community. These women's associations have established a tailoring center with 15 sewing machines where senior members train younger women, creating a means for them to generate income outside of coffee. These efforts build economic and social resiliency for the whole community, as the women have displayed the tendency to consistently invest their earnings in educating children and supporting those in need.