Katy Keisling is in Colombia working on a project—funded by Dutch NGO Progreso—to put technological toolkits in the hands of coffee farmers to measure variables in production. It’s the latest project from Sustainable Harvest®’s Experimentos en Cafe series, which tracks innovative projects on the cutting edge of coffee. Katy is documenting her work on this blog; read her first post here, second post here, and third post here.

Last weekend as I rushed to the bus station in Huila, it suddenly hit me that my work here was coming to a close. After weeks of training farmers on how to use the toolkits, they are officially in farmers’ hands, and we are now patiently waiting for the first samples of dried coffee to arrive in the office for cupping. 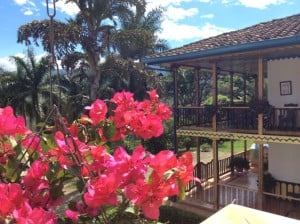 But I couldn’t leave Colombia before testing out this technology in one final, utterly different context. Café Granja La Esperanza is a large farm in the Sustainable Harvest® supply chain that specializes in exotic varieties such as Geisha. In the early stages of the project, we reached out to Hernando Tapasco, Granja La Esperanza’s resident agronomist, Q-grader, and coffee-experimenter extraordinaire, with an invitation to participate. And I don’t say “extraordinaire” lightly: In his five years with the company, Hernando has meticulously studied cherry color and fermentation methods, and he just recently initiated new drying processes for Granja. Naturally, when Hernando expressed interest in trying out Sustainable Harvest®’s new toolkit himself, we jumped at the opportunity.

So on Monday, I boarded a flight to Quindío for one final week in the field. This region is part of Colombia’s coffee-growing axis, one of the most important zones for production in the country. The development that this agricultural product has brought to Colombia is obvious—just look at the Parque Nacional del Café, where visitors can both ride coffee-themed roller coasters and learn about different varieties in a live coffee garden. This sense of coffee tourism reaches beyond the gates of the official parks: On Tuesday, as we tore down the steep road from Granja La Esperanza’s rainbow-painted property in a 1948 Jeep Willys, I couldn’t help feeling like I was in a sort of Coffee Disneyland. 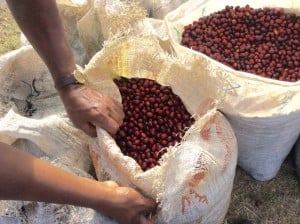 In this setting, I began to wonder how our toolkit—designed for small farmers in the field—could help a large, award-winning company like Granja La Esperanza. As Hernando took me on a farm tour and I showed him our various devices, I became increasingly aware of the precision of this organization. In the fields, quality technicians like Oscar train and supervise the 100-plus pickers employed daily to ensure they are selecting only the ripest cherries from the trees. Then, at the mill, Ivan manages fermentation, washing, and drying with an emphasis on traceability: Every bag of dried coffee is coded with details on its origin and process. Finally, at the quality lab in Caicedonia, Luz and Manuel cup samples from each individual sack half a dozen times before the coffee leaves for export. I was nearly convinced that the Granja team had no use for our devices—that is, until I asked a simple question.

How do you know when the coffee is done fermenting? 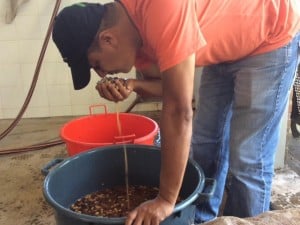 Hernando walked me through the techniques. First, there’s the pole method. Take a long object—like a stick, a broom, or your own arm—and shove it downward into the mass of fermenting coffee. If you remove it and the hole remains intact, the coffee is ready to be washed. If the walls cave in, it still needs time to ferment.

And then there are various sensory tests. Squeeze a handful of grains between your fingers—if the mucilage comes off easy, it’s done. Alternatively, rub two handfuls together; does it sound like rocks, squeaking, and grinding? If you’re not sure, pop a bean in your mouth. Is it sweet, fruity, acidic?

In this moment, it wasn’t the methods themselves that surprised me—I had seen almost of all of them before, working with small farmers. It was precisely the fact that these were the same methods used by small farmers in the field, and they were being employed by a large, well-established company. 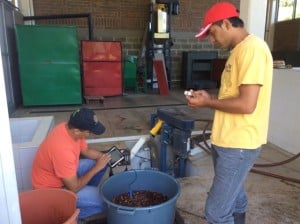 It was then that the true potential of this project sunk in. I had assumed that at Granja, these processes would be scientifically monitored, if not mechanized. But even to their team, examining indicators like pH, ambient temperature, and humidity are novel concepts. Across the board, quality control in coffee is still guided largely by sight, sound, smell, taste, and touch, as well as experience and tradition.

“We’ve been doing all of this by intuition,” Hernando explained to the team at the processing plant after a week of data collection. “But if you have tools to measure what you’re doing, it can make the work less difficult.” Ivan, wiping his brow after another 13-hour work day, nodded in agreement. “There will always be people like you working in coffee,” Hernando reminded them. “Technology is not going to replace the work you do. But it can help facilitate quality monitoring and consistency.” 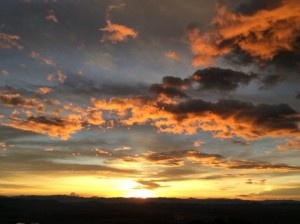 Boarding yet another return flight to Bogotá on Friday, I realized the next plane I step on will be heading back to the States. Indeed, all signs point to the fact that the project is ending: I can count my remaining days in Colombia on one hand; the storage space on my iPad is nearly full with pictures and video; and even the sunsets seem to be getting more profound. But I think about these toolkits—where they are and who they are with. I think about Hernando’s words, and the seemingly boundless potential of this type of technology for farmers of all sizes, contexts, and experience. And I feel more strongly than ever that our work here is only just beginning.