Sustainable Harvest® operates on a sourcing initiative called the Relationship Coffee Model, which aims to increase value through the supply chain by investing in growers and providing training and infrastructure at origin to deliver the highest-quality product to buyers around the world. 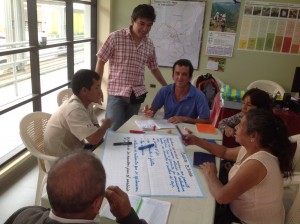 In keeping with that model, Sustainable Harvest® regularly collaborates with stakeholders from throughout the supply chain on projects in coffee-producing countries. One project currently experiencing success is with the Peru Opportunity Fund (POF): In November 2012, the Peru Opportunity Fund partnered with Sustainable Harvest®, San Diego-based roaster Café Moto, and coffee machine manufacturer Franke Coffee Systems to launch a three-year project aiming to increase competitiveness in the Casil and Apesi coffee cooperatives of San Ignacio, Peru. The project sought to accomplish this goal by improving the productivity of their coffee farms and the quality of their coffee beans according to the international standards of the specialty coffee market.

Now more than halfway through its lifespan, the project has been a clear success, demonstrating tangible accomplishments ranging from implementing regular trainings to constructing a new cupping laboratory and addressing food-security issues.

Here is a deeper look at some of the strides that have been made: 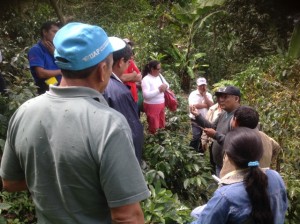 One way the project sought to empower Casil and Apesi farmers was through Field Schools that would bring together groups of producers every month to receive agricultural training. The Field Schools—the first trainings of this type to be implemented in the San Ignacio region—began in January 2013, and were designed to be interactive, dynamic, and to promote teamwork. They also were focused on building the capacity of the producers so they could replicate the training with members of their own community—a “train the trainers” approach that helps spread best practices exponentially.

In 2013, the Fund helped install Field Schools in four regions of San Ignacio: Barrio Nuevo, Bajo Potrerillo, San Juan de Pacay, and Puerto San Antonio. Over the course of the year, the schools covered topics such as quality control and marketing; integrated management of pests and diseases; pruning and shade management; and production of organic insecticides. At the end of 2013, 90 farmers from across the San Ignacio region graduated from the Field Schools. Eight standout students were selected as Promoters and were charged with teaching what they had learned to the people of their community.

The success of the Field Schools has continued into this year, as the Fund has launched four new schools in 2014 while also supervising the Promoters who graduated last season as they have begun their own teaching programs in their communities. In May 2014, 70 producers participated in Field Schools training, with last year’s Promoters on hand to support the training. The participants left the trainings eager to return to their fields and implement what they had learned on their own farms. One of the participants, Sr. Eleuterio, said that thanks to his 2013 Field School training on biofertilizers he has had a great change on his farm, and he has high expectations for his next harvest as he continues to apply what he has learned to increase the quality of his coffee. He also said that he has recommended to every member of the Casil cooperative that they attend the Field Schools.

Another key accomplishment of the project has been the completion of the construction of a cupping laboratory and training center at the Casil cooperative. Called the Center for Excellence, it trains cuppers and farmers throughout the region on how to analyze the quality of their coffee and how harvest and post-harvest techniques on the farm affect the quality of their coffee in the cup. In July 2013, the Center for Excellence hosted a coffee quality contest—the first of its kind in the region. It is now considered one of the most complete cupping facilities in San Ignacio.

The project has also made a strong commitment to food security issues in the region. This arm of the project, which targets women community leaders, focuses on teaching coffee producers and their families how to build their own food gardens and raise their own animals, in turn providing them access to healthy food and income diversification.

One food security forum was conducted for the community in 2012, with an attendance of 70 women and technicians. Participants noted that after the training, they had more access to fresh vegetables and organic foods and didn’t have to travel to the city as much to buy vegetables, lowering their food costs. They were also able to sell the vegetables they grew on their farms at the local market or exchange them for other food, including bread.

Sustainable Harvest®, Cafe Moto, and Franke Coffee Systems are collectively enthused about the progress made so far through the project. The ultimate goal is that producer participants increase their ability to manage their farms in a sustainable manner with good agricultural and post-harvesting practices that permit them to have a higher income than when the project started. “It’s extremely meaningful for us to partner with Sustainable Harvest® on projects that make a tangible impact in coffee-producing communities,” says Torrey Lee, owner of Café Moto. “From the Field Schools to the food-security measures to the cupping lab, amazing strides have been made with this project to benefit San Ignacio.”

Franke echoes those sentiments when discussing its involvement with the project. “No matter who you are in the specialty coffee industry, whether you’re a roaster, a coffee shop owner, or an espresso machine manufacturer, it all starts with the coffee farmers,” says Terry Hoelle, Vice President of Sales & Marketing for Franke. “That's the reason Franke is proud to support the Peru Opportunity Fund. By learning and then using proven, sustainable methods to grow and process their coffee, these farmers will produce a higher-quality product and provide additional income for their families. It not only makes good business sense to give them the support they need, it’s also the right thing to do.”