Since 2011, the Good Food Awards has been rewarding achievements in flavor and environmental sustainability. On January 8, the awards’ 2015 winners were announced, and Sustainable Harvest® is proud to have sourced one of the winners in the coffee category: Sidama Homacho Waeno from Oakland, Calif.’s Blue Bottle Coffee. 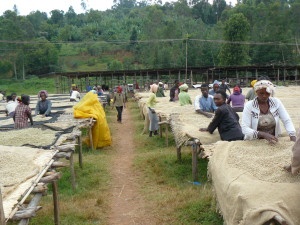 Homacho Waeno is a 3,500-member cooperative founded in 1975. Its 4,000 members cultivate coffee on 2,000 sloped hectares of rich volcanic soils in Ethiopia’s Sidama region. On average, members’ farms are between 5 and 7.5 acres in size, and on that land they grow many coffee varieties native to Ethiopia, including Wolisho, Gurume, and Dega.

The co-op produces world-class coffee with citrus and spice notes balanced by nice acidity and a nuanced, sweet aftertaste. Blue Bottle won first place with the coffee in the Africa category at Sustainable Harvest®’s Roaster HarVees in October 13, held in conjunction with the 12th annual Let’s Talk Coffee® event.