You know that feeling you get when you see someone truly beautiful? Taste something truly transporting? Smell something truly delicious? When we’re around beauty, it instantly generates feelings of nervousness and awe. With beauty comes curiosity as well because it implies something different, something unusual, something unattainable. We can’t stop looking or sampling; we can’t really believe our senses.

I experienced this a fe 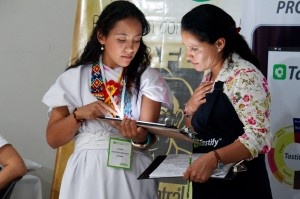 w weeks ago in Colombia when I met Ati Zeygundiba, a lovely young Arhuaco woman from the coffee-producing group Asociación Anei (Asoanei) in the Sierra Nevada de Santa Marta. Ati emanates an air of reserve and grace. She is in her early 20s and a cupper at Asoanei. She wants to be the first Arhuaco woman to become a certified Q Grader.

Four people from the Arhuaco tribe of indigenous people attended Let’s Talk Coffee® Colombia, Sustainable Harvest®’s farmer training event in June. They live in the snowy Sierra Nevada Mountains, which brush up against Colombia’s white Caribbean beaches. During the event they dressed in traditional costume: The women wore wraparound white linen dresses stitched with bright colors at the neck and sleeves. They tied white cotton scarves around their waists. Around their necks hung heavy strands of vibrantly colored jewelry. Their necklaces are woven painstakingly with tiny beads and can take months to make. Some weave thick bands with intricate patterns, while others take the shape of three-dimensional flowers and orchids. 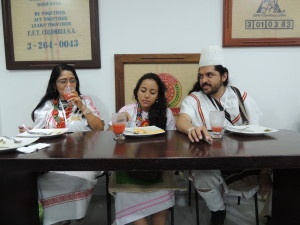 From the outset, this group imposed a sense of awe and respect. People at the event flocked to them, whether because of the journey they had made to get there, or the feeling that perhaps they were out of place but at the same time radiated ease and elegance. There were three women in the group and one man. Ati was the youngest and most reserved.

I finally sat down to talk to Ati at the end of the event. Though I had photographed her, I had never really introduced myself. I felt nervous as I approached her, and I could sense the mutual relief as we finally began talking.

Her Spanish name is Oledis Izquierdo, but she told me fiercely that she prefers her birth name, Ati Zeygundiba. Though apparently shy, she speaks eloquently and rapidly, inhaling sharply to catch her breath between phrases. 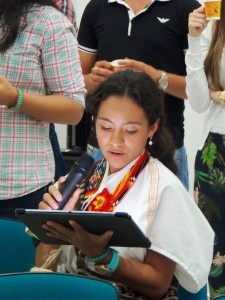 “I was born on a farm,” she told me. “My father is a farmer, and my whole life I’ve been surrounded by coffee. Growing up, we had coffee all around the house; even the bedrooms had sacks of coffee.”

She began cupping with Sustainable Harvest®’s Claudia Rocío Gómez a year and a half ago. Ati helped set up the cupping lab at Asoanei, a new development for the association.

As a young woman and coffee farmer, Ati feels it’s important to work toward becoming a Q Grader so that she can gain authority and confidence that will help her sell her coffee and assert herself in her farming community.

“Before, we ourselves didn’t have the knowledge to the tell the producer, ‘You are missing this, you are getting something wrong in the harvest, you are lacking in the drying. What happened?’” Her eyes shine as she talks about how much she has been learning. “Every day I like this work more. And every day I fall more in love with coffee and cupping. It’s rewarding to be able to say to the producer, ‘You’re missing something here. Maybe we should look at your processes.’ It’s so wonderful that you can help him.” 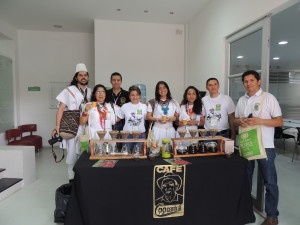 While the community has only recently begun accessing cupping tools and training, its coffee is still imbued with tradition and care. Ati explains that the coffee is organic “by nature”; farmers do not use chemicals because they see themselves as guardians of nature who are responsible for taking care of the earth.

The Arhuaco people believe that the Sierra Nevada is the heart of the world, a place that is sacred and incredibly powerful. Perhaps it explains their majestic presence: Arhuacos see themselves as the “older siblings” of non-Arhuacos. As the older siblings, it’s their job to take care of everyone and everything to maintain balance throughout the world. Because of this belief, individuals from these indigenous groups in Sierra Nevada have emerged from reclusive communities to become some of Colombia’s greatest environmental advocates.

For Ati, coffee and cupping have opened up a new world. Before, she said, she thought the world ended at the nearest town, where her community would buy shoes and necessities. Now she sees an entire universe of coffee. As a cupper, she’s fascinated to try coffees from around the world. Still, she focuses on bringing her knowledge and experience back to her community and applying it to the land she will one day inherit from her father. 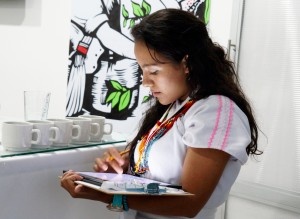 She lowers her voice and declares that one day she wants to take her coffee to a buyer and say, “This is my coffee. This is the coffee that we produced. And now we can show that this coffee has these characteristics. And tell them that this is what it is worth. It is worth this much.”

I think that those of us involved in coffee are drawn to beauty: crimson cherries, intoxicating aromas, roasted beans, intricate flavors. However, we don’t often say that coffee is special because the people who grew it are beautiful. We don’t always look at the faces behind the product that we end up admiring so much. This is beautiful.

Coffee from Asoanei is currently available in our spot offerings. Email trade@sustainableharvest.com to find out more about that and many other available coffees.