Day One at SCAA Symposium

Hundreds of coffee professionals from around the world have congregated at Benaroya Hall in Seattle this week for SCAA Symposium, the annual industry gathering featuring presentations on scientific findings and new ideas in coffee, as well as several forums for conversation.

Symposium kicked off Wednesday with several thought-provoking sessions. The first one—titled “The Heart of It”—brought together five presentations that relied on numbers and metrics to prove impact in various projects throughout specialty coffee. 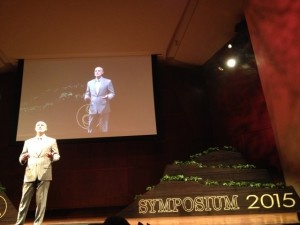 One highlight was Michael Sheridan’s “A Simple Question,” which reported on a study conducted in Colombia’s Nariño Department testing the cupping results of the Castillo and Caturra varietals. The Colombia-created Castillo is heralded for its disease resistance but perceived by some to be lower in quality. Caturra, on the other hand, is more susceptible to disease but sometimes seen as producing better quality. However, the blind cuppings done in the Nariño study found no perceived difference in quality between the two varietals. 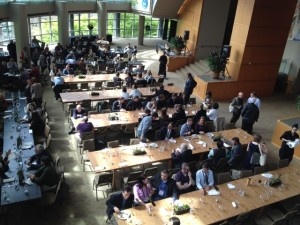 Wednesday’s final session focused on water, the ever-important ingredient in coffee, with Paul Hicks of Catholic Relief Services discussing the relationship between coffee and water at origin and Flavio Borem from the Federal University of Lavras explaining the science behind processing methods and their relation to water. The session concluded with a fascinating talk by Maxwell Colonna-Dashwood of the United Kingdom’s Colonna & Smalls that explored the premise of how “bad” water can negatively impact “good” coffee. (He’ll represent the U.K. at the World Barista Championship this week.)

Thursday’s program will include sessions on unexpected innovations and gender equity.