For the last two weeks I’ve had the pleasure of traveling around Brazil during the World Cup, soaking up the country’s unbelievable enthusiasm for football. If you’ve been watching the games, you have probably witnessed the diversity of Brazil’s climate: The U.S. team was pounded by heavy rains in Natal, then endured sweltering heat in Manaus.

I’ve found that just as Brazil’s weather is diverse, its coffee its equally if not more complex. For example, on this visit I will travel to Espirito Santo, where many Arabica smallholders and fine robusta growers successfully co-exist. And earlier in the trip I visited Parana state, perhaps best known for the deadly frost that sent coffee prices worldwide sky rocketing in 1975. There I visited smallholder and medium-sized farms producing some amazing coffees coming out of lower altitudes; the temperatures in the region fluctuate wildly on a daily basis, allowing lower-grown coffee to fare well. The coffees were complex, and some had African like acidity. It goes to show that Brazil is amazing—not just in football! 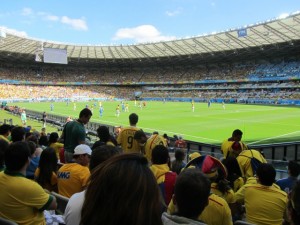 The World Cup has taken precedence in Brazil in recent weeks, and as the country has shifted its schedule around the games, that has allowed me to score some meetings with association leaders to talk about Let’s Talk Coffee 2015. Brazil will be an amazing host, and I am visiting many places throughout the coffee lands of Brazil to find the best location for our 2015 event. 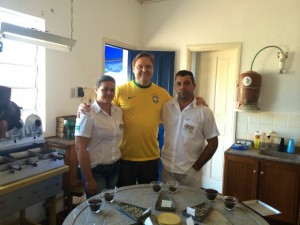