Next generation of coffee farmers shine in Colombia

Colombian coffee is steeped in tradition—just take a look at the 1950s-era Willys Jeeps transporting coffee down from the mountains for one example. This tradition has led one generation after another to take up coffee farming, but it appears we’re entering a transitional period. It’s been reported that the average age of a Colombian coffee farmer is 54 ½ years old. Colombia’s coffee industry is rooted in history and dedicated to preserving its unique culture, yet many in the younger generation see coffee farming as a challenging line of work with a questionable economic future. The industry believes it’s vital to engage the next generation of coffee farmers in order to continue the country’s proud coffee tradition. 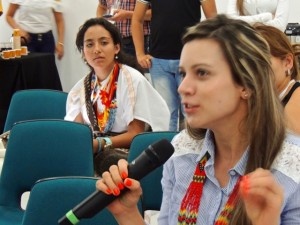 And so it was exciting to see so many youthful faces at last week’s Let’s Talk Coffee® Colombia Regional, a training event intended to strengthen the Sustainable Harvest® supply chain. (Read more about the event here.) Throughout the event, young people mingled with veteran cuppers, producers, agronomists, and cooperative leaders, and the result was a lively three days in which new ideas were exchanged between coffee growers of all ages from Sierra Nevada of Santa Marta, Tolima, and many other parts of Colombia.

Many of Let’s Talk Coffee® Colombia’s attendees believe that some of the most important issues in the coming years will be organic cultivation, better cupping analysis, and greater communication between farmers.

The topic of organic cultivation in particular generates some lively debate. On the one hand, organic farming is an effective way for farmers to find differentiation in the market. On the other, it can be a risky practice with negative effects on quality. Nevertheless, more and more farmers are moving toward organic cultivation, if not for differential prices then because they want to take care of the earth and the environment.

The younger generation also sees the appeal of organic production, as it helps to nurture land they will soon inherit. Ati Zeygundiba is a precocious young cupper from the indigenous Arhuaco tribe of the Sierra Nevada. She says that though she understands the risks associated with organic production, she can’t imagine another way of growing coffee. “We are nature’s guardians,” she says. “There [in the Sierra Nevada], farming organic is by nature, not because we need a certification. We understand the necessity of taking care of the environment.”

Additionally, there have been great developments in organic pest control products and fertilization. In Cauca, for example, a group of farmers has been experimenting for 10 years with biological plague control and is beginning to pass this knowledge on. Drawing on the wisdom of those who have gone before them, the next generation of farmers sees organic cultivation as an important component of their future. 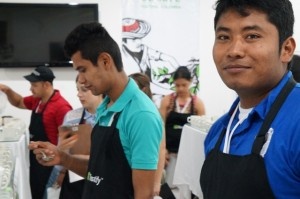 At Let’s Talk Coffee® Colombia, perhaps the clearest sign of the youthful presence was in the tasting room. For most of the young people, cupping has become a way to appreciate the complexity of the coffee their parents grow. Davier Matoma Lazo is a young farmer from Tolima, an area that is now developing an infrastructure around coffee; it produces mostly organic coffee with exciting profiles. Davier is in his early 20s and just learning how to cup—using his burgeoning coffee knowledge, he is experimenting with using processing methods to achieve specifics flavor profiles in his coffees. He says he also introduced his sister to cupping, which drew her toward the cupping industry and has led her to pursue coffee farming as her future career path.

For many young farmers in Colombia, being able to taste flavors in the cup fosters an excitement about coffee that transfers to the farm level. “When [farmers] start to learn about preparation and cupping, they begin to see the necessity of producing good coffee, and they begin to look at processes in the farm such as fermentation and fertilization,” says Yolanda Rios Gallegos, a Colombian Q Grader. She grew up on a farm and now does quality analysis for various communities and also teaches workshops on cupping to young farmers. She says she dreams of one day being able to take her son and daughter to the Specialty Coffee Association of America convention to show them how truly global and professional the world of coffee is. 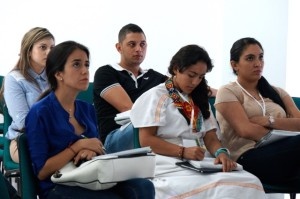 From events such as Let’s Talk Coffee® to broader forms of communication such as online networks, coffee provides a medium for global exchange. Producers, agronomists, and cuppers from around the world are benefiting from communication and conversation. Who, then, is more equipped to take advantage of these tools than a young generation that has grown up with Internet, social networks, and smartphones? The same way that cupping provides a feedback loop from producer to buyer to consumer, so too does global connection and the sharing of knowledge help us improve quality and processes along the supply chain. At Let’s Talk Coffee®, 20-year-old Alexander Contreras Henao said the event’s collaborative nature got him even more excited about coffee as a career. “In the last few days we were able to get to know one another and access a global vision” he says. “We can’t think about the personal, but rather we need to think about the big picture.”

At the Let’s Talk Coffee® Colombia Regional, we got to see the young new faces of Colombian coffee and glimpse how these young professionals might build upon tradition. Whether through organic production, greater communication, or more sophisticated profiling, the next generation cares about sustainability and is inspired by cultural exchange. There are many challenges down the road, yet we can hope that events such as Let’s Talk Coffee® motivate innovation and advancement. Juliana Ochoa, a young agronomist from Antioquia, expressed it well: “This event puts into context where coffee agriculture is now and where it will be in the future.”