Remember the first time you saw a cupping form, its tiny lines, boxes, and hash marks filling the page like a hyperactive doodle? Remember how hopelessly abstract it seemed? Useful as cupping forms are at maintaining industry standards, you can’t look at one and see how a coffee tastes.

In 2014, our Q-certified Chief Technology Officer Oscar Magro and founder David Griswold sat down to discuss whether there was a more powerful way to represent the flavor and quality of coffee and create a common language of taste between coffee roasters, producers, and others in the supply chain. Oscar summed up the problem for me: “Two 86-point coffees can taste so different from one another. A number doesn’t show you that.”

Oscar has spent the last year building Tastify™, a dynamic web-based app that lets cuppers efficiently describe and score coffees. The app then generates a clean, visually powerful picture of a coffee’s taste and quality—a custom, dynamic flavor wheel. Using the coffee flavor wheel as the basis for the app design was the “aha” moment: “People are familiar with it,” Oscar told me. “And it’s simple to understand—that was the most important thing.”

Later this week at the Specialty Coffee Association of America’s annual trade show in Seattle, we will officially launch Tastify™ for individual and enterprise users.

Nathanael May, director of coffee at Portland Roasting, has been using the app since the beta version was launched in October 2014. He told me it has streamlined communication with the producers and importers that sell him coffee: “Instead of sending an email that says, ‘We scored the coffee at 84. Let’s move forward!’ I can give them a much fuller idea of where our palates are at with this particular coffee. They know what our experience was exactly, without me doing a lot of work scanning and digitizing a score sheet.” 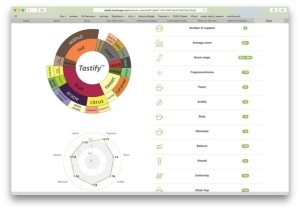 In Tastify™, cuppers enter data about a coffee—flavor and aroma descriptors, information about uniformity, balance, sweetness, acidity, cleanliness, and defects—into a polished, minimal interface using any web-enabled device. Tastify then generates a custom flavor wheel, spider graph, and word cloud that together create a unique picture, like a fingerprint, for each coffee.

Nathalia Flórez is the Bogota-born, Montreal-based quality assurance specialist at Cafe Mystique. “It makes everything easier,” she said over the phone. “The results are in a database so I don’t need to scan my cupping forms. I can go back to any earlier cupping and the flavor wheels make it easy for me to see the results without going deeper. I can send results immediately to a client or importer. It’s a more professional approach to whomever I’m sending results to, instead of sending an Excel spreadsheet.” 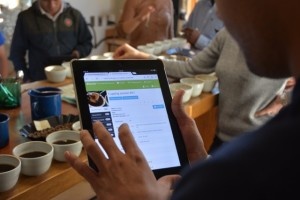 Nathanael says he sharpens fewer pencils these days since most of the descriptors for coffee are already built into Tastify. “A couple taps, and I’ve described a coffee as having tangerine, cocoa, and sweet pea characteristics,” he told me. “It’s made cupping more efficient, which gives us more time to talk about and assess coffee, which is what cupping is for!”

From that first conversation in 2014, Tastify™ was built in only a few months. Oscar was the ideal designer: Q certified in 2007, Oscar has been a cupper since 1999 and a professional programmer since 1995. He created Tastify using the Ruby on Rails coding language, which has been used to build famous apps like Twitter, Airbnb, and Square. But he didn’t only rely on his own experience to build Tastify™; the entire Sustainable Harvest® team provided invaluable input. The concept was previewed at the 2014 SCAA convention in Seattle to determine whether it was a tool worth building. Would roasters, growers, and others in the industry use it? The answer was an overwhelming “yes.”

Nathanael is most excited about Tastify™’s ability to store and retrieve cupping data with powerful search tools. “I can go back and immediately know why we approved that Guatemala sample back in December without having to hunt through a stack of scoresheets or sort through my emails. Additionally, when we find a coffee that works really well in a blend, we can save the Tastify™ profile and then refer back to it and refer our sourcing partners to it when we’re looking for a replacement six months later. It’s improved our ability to blend based on flavor profile instead of recipe.”

The app’s simplicity has created an unexpected benefit for Nathalia: “It allows me to teach other people,” she says. Cafe Mystique wants to deepen the knowledge of employees, including roasting plant workers, about the flavors of coffee. “Because it’s so intuitive, it’s a really powerful teaching instrument. That’s what I’m excited about.”

Tastify™ officially launches at the Special Coffee Association of American annual conference, April 9-12 in Seattle. Users can take a live tour of the app at the Sustainable Harvest® Booth 10030, and all are welcome to join us at a launch party: April 10, 3 to 5 p.m., in the 3AB Lobby at the Washington State Convention Center.