Our supply coordinator Beto Cornu recently filed this report from the field in Mexico.

The 21st of September cooperative of Oaxaca, Mexico, faced some major obstacles in 2014. For one, the last container of the co-op’s 2014 harvest was stolen on its way to port. (Though the organization had price insurance on the coffee that mitigated the damage.) 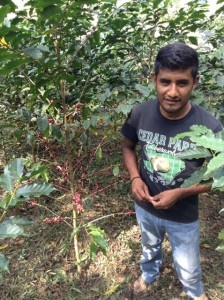 A more significant—and ongoing—challenge to 21st of September is coffee leaf rust, the airborne fungus that has plagued coffee farms throughout Central America and Mexico in recent years. Coffee leaf rust (also known as Roya) has spread to all 21 of the communities that 21st of September works with, and it appears to be a long-term issue that growers will need to overcome.

Amid these challenges, I witnessed a couple of success stories on a recent visit to some of the co-op’s coffee-growing communities, and they instilled me with hope for the future.

Seventeen members of 21st of September grow coffee in San Antonio Jicaltepec, a small, remote mountain town with a population of fewer than 100 people.

Jicaltepec has a history of autonomy; during the Mexican Revolution its residents were set free from an old hacienda structure and gained control of their land and destinies. Because of this autonomy, the residents of Jicaltepec preferred to remain independent for many years before deciding to join 21st of September four years ago.

The community joined the co-op in part to improve its standing, as its coffee farms were producing almost nothing. After they joined the co-op, Jicaltepec’s residents began renovating their coffee farms, and on my recent visit I saw much enthusiasm in the town—particularly among young people—for growing coffee.

One of the many improvements is that Jicaltepec’s coffee farmers are using appropriate nursery techniques such as individual terraces for each plant, proper pruning, and shade control. This year, Jicaltepec will take part in a program with 21st of September to replace its old depulpers and establish communal wet mills.

Back in 2010, a group of women producers in San Miguel Reyes—another small coffee-growing community under the 21st of September umbrella—decided to put aside a portion of the social premium earned from their coffee into a savings fund they could borrow from. They each set terms for the loans, including the interest rate and the limit they could ask for at one time. 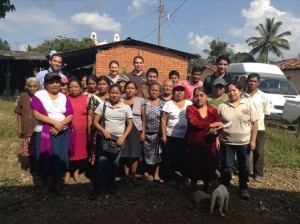 This savings account has grown over the years, and is currently at around 31,720 pesos (about $2,165). The women use the fund to help the farm and the community, including paying workers for tasks like pruning, farm cleaning, and harvesting. They are also using the fund for educational purposes, helping to pay for expenses associated with their children’s schooling.

The women plan to continue adding to the savings fund with the goal of reaching 100,000 pesos, which is the amount they need to offer pre-harvest financing to farmers in their community. They believe this goal is attainable, and they are excited about the financial independence they are working toward with the savings fund.