A Visit to Mr. Jonas Kaaya

For a region vulnerable to harsh weather fluctuations, cash crop productivity and food security are pressing issues. Northern Tanzania is a semi-arid region, where rainfall is periodic and drought conditions persist for several months each year. Farmers have difficulty harnessing the heavy downpours of the rainy season, and therefore their crops suffer during droughts. Since the spring of 2012, Sustainable Harvest® has been working with Green Mountain Coffee Roasters to promote up-cycling, a method of transforming waste to create new products, as a way to combat the food insecurity so common among Tanzanian coffee farmers. Through targeted trainings and workshops, Sustainable Harvest hopes to empower more than 20 farmer groups (approximately 1,500 individuals) to increase their income and food supply by taking advantage of readily available waste materials.

In order to expand their knowledge of conservationist farming methods, Sustainable Harvest’s® Up-cycling Project Team paid a visit to Mr. Jonas Kaaya on June 1st, 2012. Mr. Jonas is a coffee farmer who sells his cherries at Pendo Cooperative, located in the Arusha region of Tanzania. Apart from growing fruits, vegetables, coffee, and grains, he also owns natural forest land which he has chosen to preserve instead of harvest. In 2010, In order to combat the Tanzanian dry season, Mr. Jonas has created a system which captures rainwater and keeps the soil vibrant and fertile, even during times of drought. This means healthier, more productive crops, and a higher income he can use to feed his family. The system is simple, effective, and relatively low cost. Mr. Jonas won one million Tanzanian shillings (around US$635) for the conservation efforts he practices on his farm. 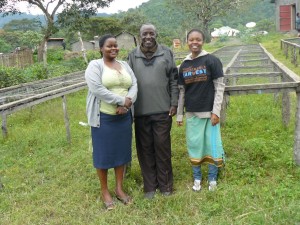 After noticing that his crop production was declining, Mr. Jonas felt he needed to reinvigorate the soil that had been made infertile by decades of intensive land use. The method he uses is very simple. First, he digs trenches in the ground two feet deep and at least one meter apart. Then, he fills the trenches with plant remains, animal manure, organic fertilizer, and some of the remaining soil. Finally, he places timber on top and then fills each trench with soil. The system captures and retains moisture during the rainy season, and as the ingredients decompose, nutrients enter the soil. Plants are grown within a meter of the trenches, so the roots can reach the water and fertile soil that lies beneath the timber. For farmers who do not use a similar system, crops shrink when the rains stop, and their yield suffers.

Mr. Jonas was thrilled to share and explain his system, and wishes that more farmers would express interest in learning to use natural waste materials to improve the efficiency of their farm. Sustainable Harvest hopes to use the success of Mr. Jonas and his innovative up-cycling system to educate other farmers about how sustainable solutions can increase income, making food insecurity an issue of the past.