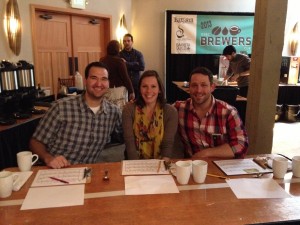 Chris Cullen, Katie Gilmer, and Josh del Sol were the judges for the three days of brewer's cup at the NW regional barista competition.

Last weekend, I judged the brewer's cup at the NW regional barista competition, a three day event taking place in south Seattle. The event, sponsored by Dillanos Coffee Roasters, had two components: the barista competition and the brewer's cup. The brewer's cup is just a couple years old. It has two rounds-- a compulsory round where competitors are given an unknown coffee and they brew it using whatever brew method they desire. The judges cup and score it blindly, without ever knowing who brewed that cup. The second round is the finals, where the top six high scorers from the first round have ten minutes to present a coffee of their choosing and brew a cup of it for each judge.

I was lucky enough to have two super cool guys judging along with me - Josh del Sol from Level Ground Trading in Canada and Chris Culler from Dillanos. We were really happy with the coffee used in the first round. Even after drinking 22 cups of it (1 per competitor), we were still finding complex flavors and an extremely clean cup. It turned out to be a relationship coffee sourced by Sustainable Harvest® - a washed Sidamo roasted by Dillanos.

For the final round, we were treated to six great coffees and great presentations by the finalists. I loved two Kenyan coffees that were presented, as well as a lovely Guatemalan, and a tasty blend of El Salvador and Sumatra. Because the brewer's cup judges are not required to discuss their scores and agree upon an overall score, the winners were as much a surprise to me as to the audience. First prize went to Brandon Paul Weaver of Slate Coffee Roasters in Seattle--his creative routine explained the absorption of water in a coffee particle using a dry sponge to illustrate water flow, and he followed it up by brewing a shining Ethiopian Limu. Congrats to Brandon and to the other participants for brewing up many tasty cups of coffee over the course of three days.