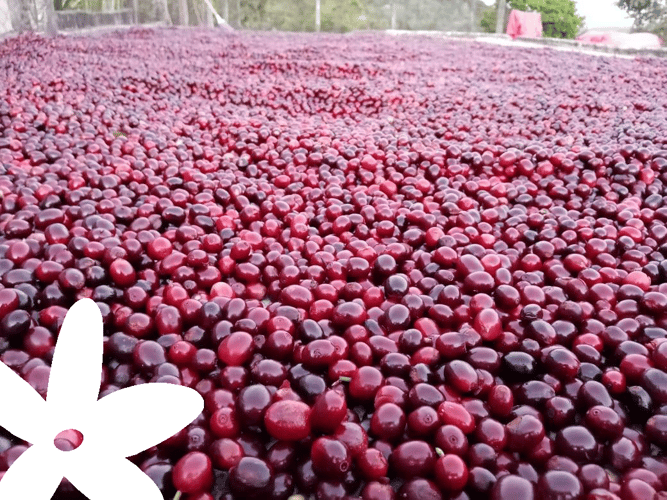 Coffee processing simply refers to the method of removing the fruit of the coffee cherry from the actual coffee seed. But how many coffee processing methods are there? For long-time veterans of the coffee industry, the answer to that question is probably either two—washed and natural—or somewhere between two and five, depending on whether you consider processes like honey, wet-hulled, or pulped natural to be separate processes or simply different processing variations underneath the “natural” umbrella.

Over the past few years, however, way more processing methods have come onto the scene, and we’re sure you’ve likely heard of some such as anaerobic fermentation, carbonic maceration, lactic processed, or hydrohoney, just to name a few. It’s an exciting time for coffee processing as more and more producers learn new techniques and get experimental.

Before we dive into the new, however, we thought it’d be useful to go over some processing fundamentals with our Q Processing Expert, Yimara Martinez, and review the “conventional” processing methods. Yimara is a Q Processing Instructor Levels 1, and 2 from the Coffee Quality Institute.

“Each part of the bean and cherry has different functions during the processing stage,” says Yimara. “The bean is alive with an active metabolism undergoing different enzymatic reactions within its cells. When those layers are removed, different metabolic reactions are activated or deactivated; some can be accelerated while others remain stable.” These enzymatic reactions can have a profound effect on flavor development during processing. During natural processing, for example, since no layers are removed from the cherry as it dries, enzymatic activity slows down significantly, and the bean absorbs more fruit character from the cherry. 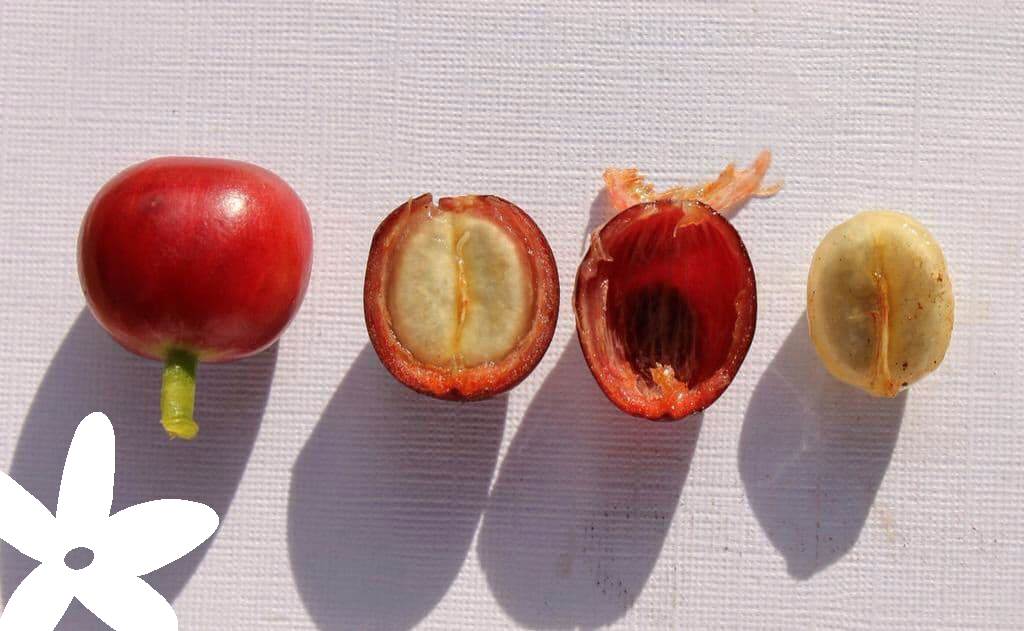 Additionally, all coffees go through a period of fermentation regardless of the specific method, but how this happens differs between methods. “In the case of the washed process, coffee goes into fermentation tanks where mucilage is exposed, consumed and fermented by various microorganisms, producing and consuming metabolites (such as lactic acid or amino acids) that support flavor development. In natural processed coffee, fermentation occurs during the drying stage while beans are inside the cherry. With different conditions for fermentation, different flavors are developed.”

The Drying Stage
Proper drying during processing is crucial to quality. Drying a coffee correctly results in proper seed “stability,” or a point where the seed’s metabolism and enzymatic activity drastically slows down (the seed is still alive, however). The most important factors that are considered here are a coffee’s moisture content, or the amount of water inside the seed, and its water activity, or the level of reactivity of the water inside the seed. 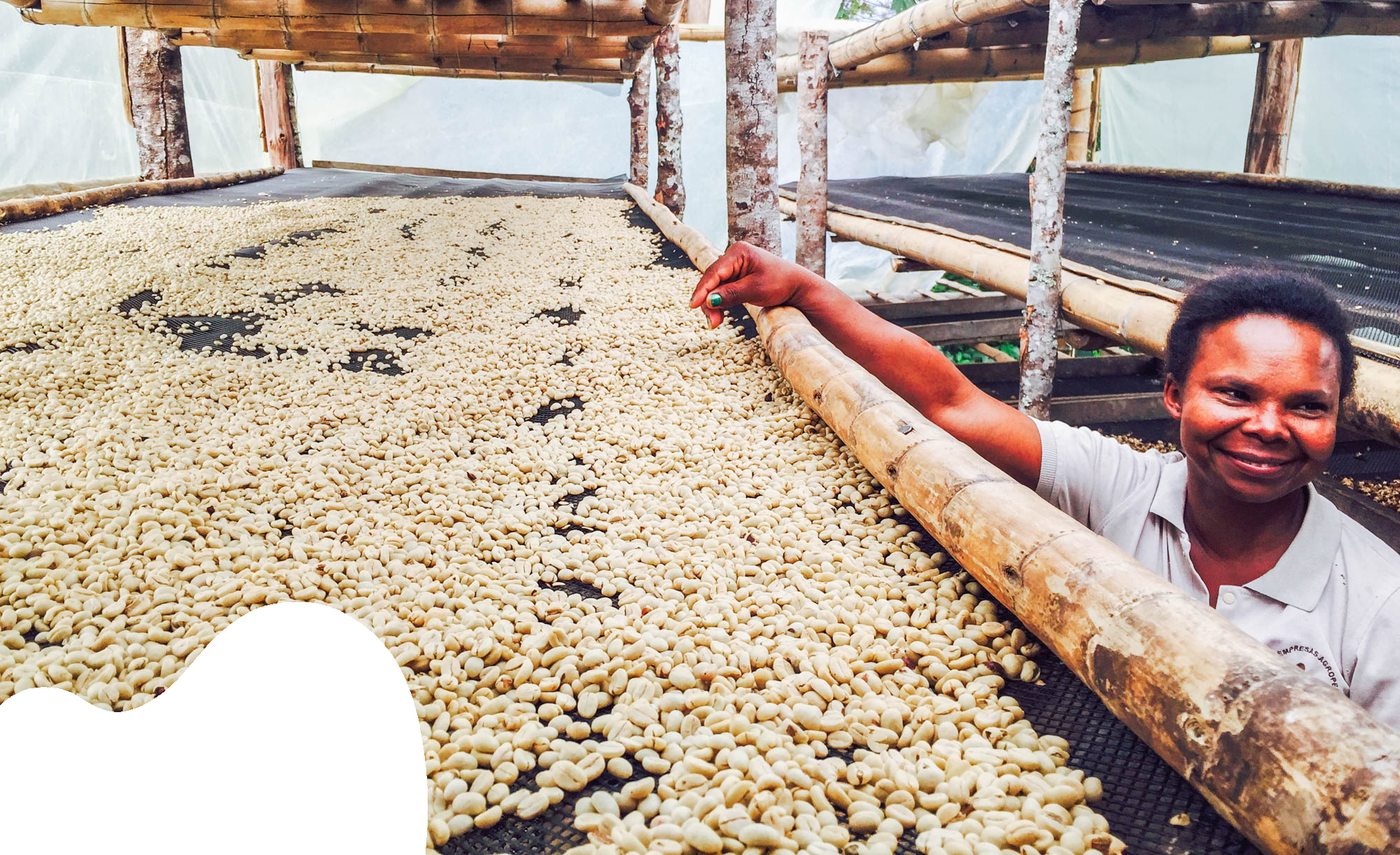 Achieving an optimal moisture content and water activity is key for a coffee to reach its full potential, and avoid developing off flavors or defects like mold. To learn more about the importance of drying coffee and water activity, we recommend checking out this Daily Coffee News Article written by Yimara titled, “An Introduction to Water Activity in Green Coffee.” If you want to get really deep into the science behind coffee drying, read our whitepaper on water activity published earlier this year, also written by Yimara.

Natural Process
Natural processing is the oldest and most basic way that coffees have been processed. Prior to the advent of de-pulping machines, this was how coffee was processed for hundreds of years.

During a typical natural process, coffees are harvested once ripe and then simply dried while still inside the cherry. Coffee is hulled after it’s finished drying. Much care has to be taken during drying to ensure that coffees dry evenly, making it a very labor-intensive process; producers have to regularly turn coffees as they dry, and the entire period can take several weeks. If not done properly, it’s easy for natural coffees to taste over-fermented or develop other unwanted flavors.

When executed well, however, natural coffees can be some of the sweetest, complex and most fruit-forward coffees you’ll ever taste, and the variation in flavor profiles seems almost endless. “You can have something incredibly fruity, something really floral, delicate and exotic, or even something chocolatey and nutty without many fruity notes,” says Yimara.

Washed Process
Around the beginning of the 20th century, farmers started processing their coffee by using de-pulping machines to strip off most of the fruit of the cherry, leaving only a thin layer of mucilage still attached to the seed. De-pulped coffee seeds are then placed inside containers for around half a day to up to 3 days to allow the mucilage layer to ferment and break down. Afterward, coffees are thoroughly washed and rinsed of the mucilage, and then placed on drying beds to dry over the next few days. 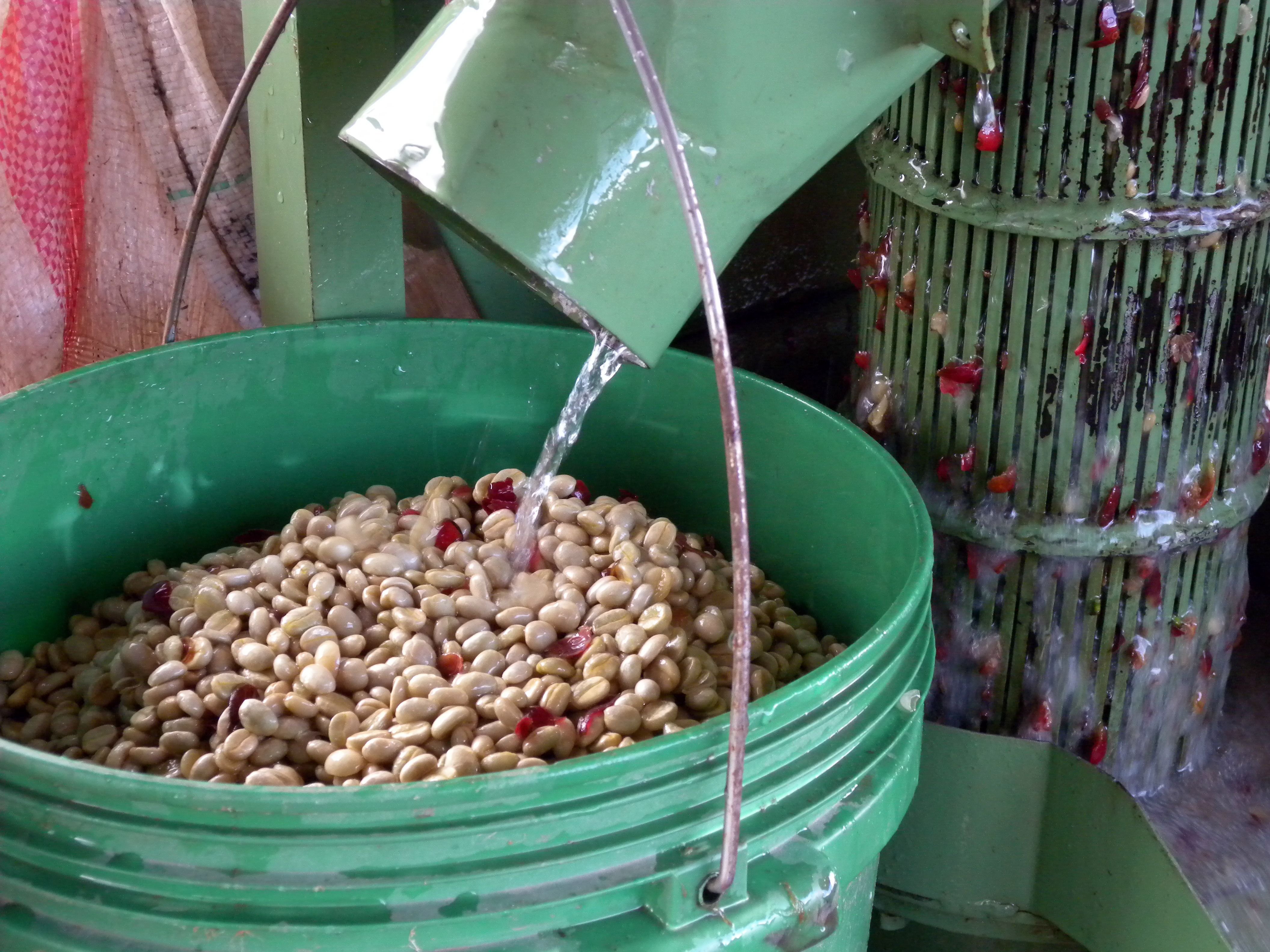 Because washing coffees is a much faster and more consistent way of coffee processing, it quickly became the go-to method for most coffee producers around the world, and remains the preferred method. However, given natural processing’s long history, there are still several regions that primarily use natural processing, especially in places that are water scarce (such as parts of Ethiopia).

The most common attribute of washed coffees is that they are “clean” or have a clarity of flavor. Since the seed doesn’t stay in contact with the cherry for nearly as long as a natural process, ripe fruit notes tend to be much less intense, and coffees tend to favor brighter, sharper notes.

Honey Process
“As with the ‘waves’ of coffee consumption,” says Yimara, “we could say there are ‘waves’ in coffee processing. Natural process coffees are the first wave, followed by washed coffees and the third wave would be the honey process.”

You could consider the honey process as a middle-ground between a full natural and a washed coffee. In a honey processed coffee, varying amounts of fruit and mucilage are first removed, after which a coffee goes straight to drying—the remaining mucilage isn’t washed off. The “honey” in this case refers to the sticky layers of mucilage that cling to the seed as the coffee dries (there’s no actual honey involved). 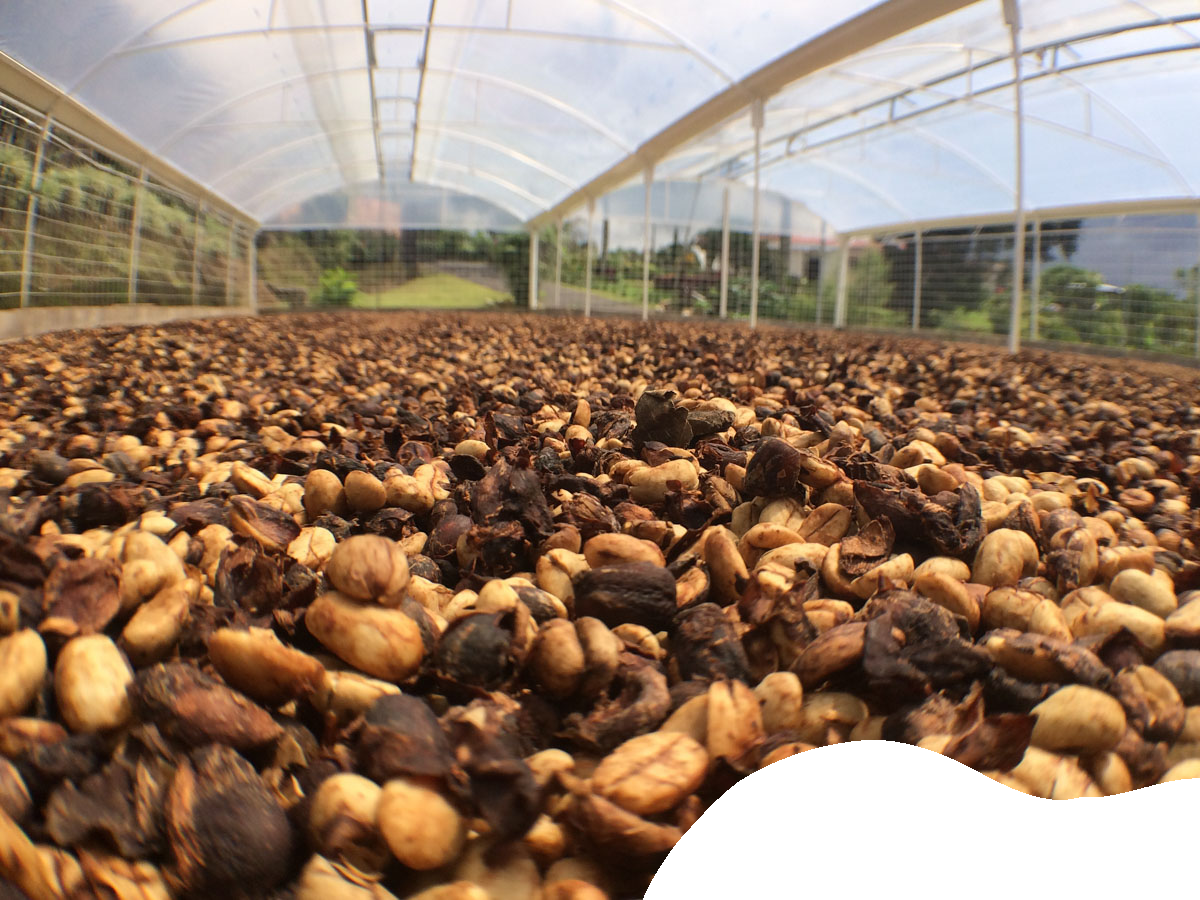 This method was developed within the last few decades as a method of speeding up the natural process and is very prominent in Costa Rica as well as Brazil, where it’s also common to find a similar method called "pulped natural", where the coffee is démucilaginated, removing most of the mucilage and the skin of the fruit. On the other hand, the "honey" is pulped, only the skin is removed and almost all of its mucilage is left intact.

There are different degrees of honey process depending on how much fruit is removed: “black honey” (the least amount removed), “red honey,” and “yellow honey” (most mucilage removed). The more mucilage is left, the darker the “honey” color that develops on the seeds.

Flavor-wise, the profiles of honey processed coffees are a mix of both washed and natural coffees: you get the sweetness and complex fruit notes of a natural, with the clarity and brightness of a washed coffee. It’s the best of both worlds in many cases and is a favorite processing method among coffee professionals!

Wet-Hulled
Also known as “Giling-Basah,” this is a method of processing unique to Indonesia, and particularly the island of Sumatra. Wet-hulling is what gives Sumatran coffee its signature profile of low acidity and a smooth, rich body. 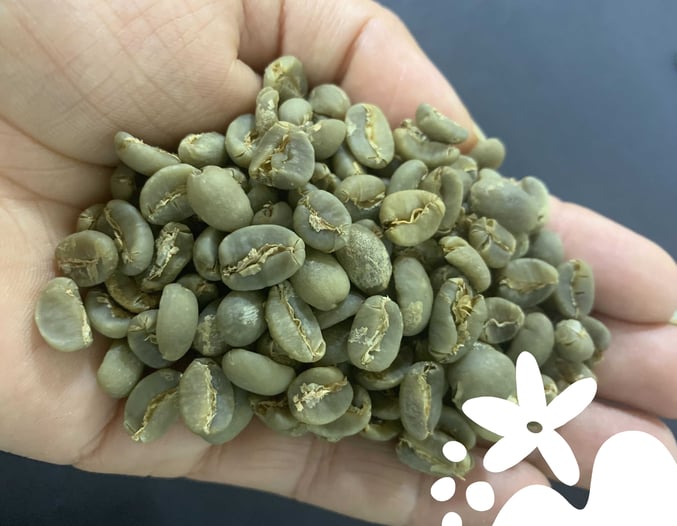 The wet-hulled method was born out of necessity. Indonesia has an exceptionally humid climate, making conventional drying very difficult. Removing the parchment layer allows coffee seeds to dry much more rapidly than they otherwise would. The downside, however, is that coffees are more susceptible to contamination by unwanted microorganisms such as mold or fungi. The parchment layer normally acts as a protective shell for the delicate green coffee seed, and removing puts the seed at greater risk for acquiring defects. Green coffee is also remarkably fragile before it’s finished drying; you could easily crush wet-hulled seeds between your fingers.

Indonesian producers have to take extreme care in order to avoid as many defects as possible when it comes to processing coffee via the wet-hulled method. When it’s done well, however, there’s nothing quite like a cup of Sumatra—there’s a reason why Sumatra is one of the most recognized origins among consumers globally.