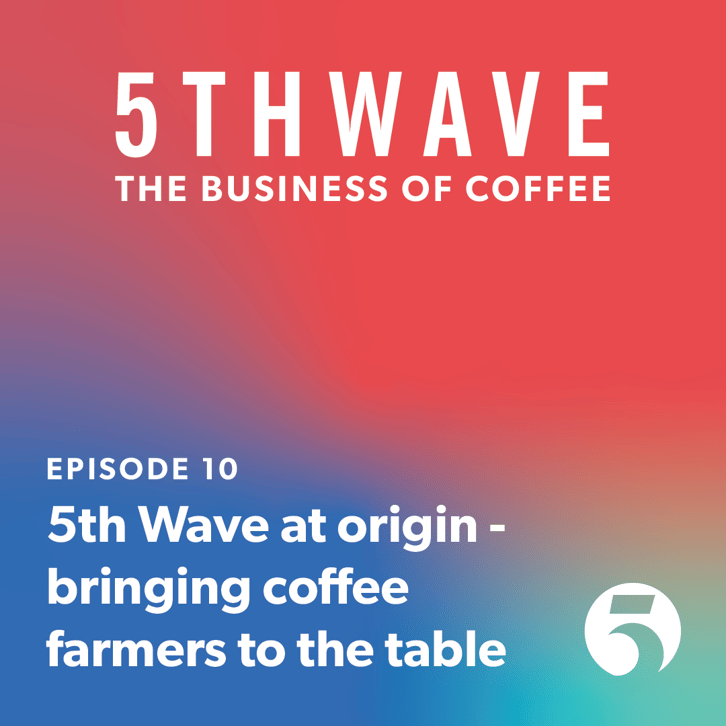 From discussions on the need for connectedness and empathy throughout the coffee supply chain; a more holistic understanding of sustainability and living income; the importance of farmer training and education; and how to bring more farmers to the table as the best means for scaling excellence in coffee, we encourage everyone to give this podcast a thorough listen!

Read below for a short, transcribed excerpt from the episode, or click here to listen.

"Like many people in coffee, I sort of fell into a career that I never really expected. I was planning to go to business school right about the time that the Berlin Wall was falling and the International Coffee Agreement was coming apart, and I decided that before I went to business school, I would go down to Mexico and help some coffee farmers who were trying to form a national organization.

It was a really interesting time for coffee back then because not only was the market collapsing for smallholder farmers in Mexico and many other parts of the world, but it was also a time of liberalization. The key ways that farmers had been taken care of by the government in Mexico were all disappearing rapidly. I was there as a volunteer working in Mexico City and I had this moment where a farmer asked a question that would basically change my life.

A farmer had come down with some coffee beans and had taken a seven-hour bus ride from northern Mexico all the way into Mexico City to come to this national organization that was staffed by just a few volunteers—mostly Mexicans and myself. And he walked into the office, put a bag of parchment on the desk and said, 'I hear you are here to help us sell our beans!'

"My hope is that the business approach that we've honed for almost 30 years—the Relationship Coffee Model—could be the primary sourcing paradigm for the fifth wave."

I'd only been in coffee for a couple months. There was no internet. I was just reading books on how to export coffee, but as this gentleman and I sat and spoke about where he came from and the families back at the village who are all waiting for him to come back with an answer...I looked at the beans in parchment and realized he couldn't send it like that to a broker in New York. At that point I realized that he needed to learn how to sell his own village's coffee beans, and I thought, 'How does he connect to this market?' Because there really wasn't a playbook...they were just in an economic free for all to try to figure out who they were selling to and what the demands of that market were.

And so I began my story by just taking those beans to New York where I had my first meeting on Wall Street and showed pictures of a farm. These traders looked at me like I had landed from Mars. They bought coffee on a transactional, physical basis based on the screen size of coffee—definitely not based on where it came from, or the farmers who grew it. That didn't go very well there, but I knew a couple guys who were making ice cream by my previous work up in Vermont—guys named Ben and Jerry.

So I took my beans up there and asked them, 'Would you be interested in this?' They didn't say yes, but they also didn't say no. They just sort of said, 'How do we source our coffee and could we do it where we know the farmers more?' That story has a happy ending because the flavor of Ben and Jerry's coffee ice cream has now been coming from Mexico since the early 1990's."

"My hope is that the business approach that we've honed for almost 30 years—the Relationship Coffee Model—could be the primary sourcing paradigm for the fifth wave. Here's why: I think relationship coffee is based on a few key elements in coffee trading that are very valuable but not often found. The most valuable thing in commodities trading is trust. It's really knowing who you're working with, where things are coming from, and trust gets created through transparency—very, very high levels of transparency that happens when you put buyer and seller together. "In the Relationship Coffee Model, we have to be so open about the business of coffee, the playbook of coffee, and the pricing of coffee, so that a conversation can happen between the grower and the roaster. That was seen as a business liability when I first started, having that much transparency. I was told by business school students and by others, 'That's a liability—you can't tell people where you're getting the coffee and what you're paying and be completely open about pricing.' But I had to defer. I felt like it was going to be more valuable if we could get people together and talking about all the other items about the coffee trade that they were trying to conduct together.

"It's simply making sure that you're developing the human relationships between the coffees because they all come from farmers."

But people have come around to our model to expect transparent pricing and knowing what the growers are getting paid. Having a direct relationship with the growers provides so much more efficiency. If you can be a connector, provide more tools and more value to the roaster and to the growers, you build up loyalty. That builds trust, and the transparency works. I was able to turn a liability into an asset."

"I'm really proud of few things. One, I'm really proud of staying true to the same message for over 25 years about what I thought the coffee chain should be. It's incredibly gratifying to see the market verify that initial intuition that people care about where their product comes from and who grows it, and that they want to be part of something that makes the world a better place. It took a lot. At the beginning, I had to basically explain what sustainability was; nobody knew what I was saying. Now, I can't go to many websites that don't look very similar to the ones we started, and that's a win to see that become mainstream.

The second thing would be the Sustainable Harvest alumni. Rick Reinhart once said that Sustainable Harvest is the best practice area for people who are not in coffee to get trained really well, and then go off and do incredible things. There are now hundreds of former employees out there that are working at really great companies who are making a huge difference. As a founder and CEO, I really am pleased to see that. And I love to see them at shows and to see where they've gone on to. There are also many on my team who have been with me for 25 years as well. Whenever I had extra money that we earned, I usually invested it in people because I felt like the coffee industry needs great minds to go forth.

The third one is going back to that moment in Mexico. There are so many examples where I feel like I've been able to connect people into a world that they otherwise wouldn't have access to. I've been very blessed—I'm from a middle class family in Colorado and my dad was a college professor. I could walk into corporate America meetings and people would give me access. But instead, I've been able to give agency to farmer leaders to be at those same places—and then step back on my part so that they can lead. And I don't think it's 'empowering' as much as just unlocking the potential that's already there by simply using whatever I can to make sure that those farmers and their perspectives are at the table."